Our Deep Fried Ambassador is busy blogging about all things N.C. State Fair related. We’ll re-post all of her Fair entries, but be sure to check out her Pretty*Swell blog.

Y’all, I cheated on chocolate-covered bacon today. With this: And now I’m sick with guilt. Or, it could be the deep-fried Oreo rock that’s set up residence in my stomach. I think it just crawled into its sleeping bag and turned off the night-light because I can still feel it. Like a five-ton grease-soaked reminder of my little transgression.

I still love you, bacon.

I had a great time at the State Fair this afternoon. I strolled the grounds during the final hour of set-up. The calm before the storm. It’s kind of nice, all fresh and new, with temporarily empty food booths beckoning.

Or barking, as is the case of the Apex Lion’s Club restaurant. Home of the Big Biscuit. And one of my all-time favorite spots at the fair.

I remember the guy who used to stand out front and talk into the mic, enticing people inside with elaborate descriptions of piiiiiiie.

Years ago when I was at the fair with a group of friends, the pie guy was hyping the restaurant while holding a giant biscuit in his hand. I wanted a photo with him, and he obliged. As he held up the demo biscuit, I pretended to take a bite.

Then, as my friends love to recall, he doubled back in surprise and said something about how big my mouth was. The whole big biscuit would’ve fit inside, according to his take on the situation.

Embarassing, yes. But also hilarious. Wish I could find that picture.

Even when my piiiiie friend isn’t out front of the Apex Lions Club, his voice still is. I couldn’t resist the chance to sit for a spell today and listen. 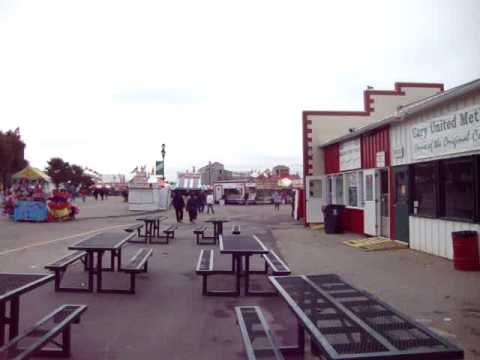