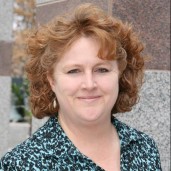 Andrea joined the department in 1996 after nearly six years as an award-winning reporter at both daily and weekly newspapers in the state. She earned a bachelors degree in Communication Studies from the University of North Carolina at Greensboro. A native of Forsyth County, Andrea's first agriculture "job" was putting tobacco sticks in place for the stringers to do their jobs.

New equipment at the N.C. Department of Agriculture and Consumer Services Soil Testing lab in Raleigh is helping speed up the time it takes to process soil samples, and is also adding to safer working conditions for employees. Funding for

With firefighting crews stationed at numerous sites in Western N.C., it took a lot of volunteers, resources and coordination to keep the operations moving and to provide meals and necessities at multiple locations, several times a day for weeks.  But,

Crews fighting wildfires in Western N.C. will enjoy an early Thanksgiving dinner today after volunteers, businesses and agricultural groups came together to provide the special meal. Volunteers with the Research Stations Division are cooking and will be feeding 250-plus at

Consumers are pretty accustomed to loading up their online retail shopping carts, hitting the pay button and simply waiting for their merchandise to arrive in a few days. Online shopping is convenient, and it doesn’t involve waiting in line or

Not just a hike in the woods; Plant Industry Division works to protect ginseng from poachers on public lands

A man on a mission For 22 years, Jim Corbin has scoured the rugged terrain of the Great Smoky Mountains National Park searching for wild ginseng. While this may sound like the introduction of a character on a reality television

Ye honored for his work in nematology

Dr. Weimin Ye was recently recognized with the Syngenta Award at the 54th Annual Meeting of the Society of Nematologists in Lansing, Mich. He was honored for his visionary work with molecular identification of nematodes, its use as a regulatory

The numbers don’t lie. It was a record-setting year for strawberry sales through the N.C. Farm to School program. Child nutrition directors from across the state ordered 20,068 flats of strawberries for the 2014-2015 school year. The flats equaled 12 tractor-trailer

Students are now enjoying North Carolina strawberries for lunch as the first shipment of berries hit the lunchrooms of schools participating in the Farm to School Program.  The Alleghany County School System is among the systems that placed orders for strawberries. Penny Walker,