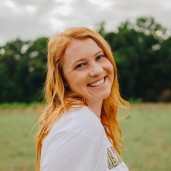 Christa Dutton is the Summer 2021 Public Relations Intern with the Public Affairs and N.C. State Fair Division of the Department. She is a sophomore at Wake Forest University majoring in Communication with minors in Entrepreneurship and Journalism. She's a North Carolina girl through and through, having grown up in Knightdale, North Carolina, which is just outside the capital city of Raleigh. In her free time, you will probably find her playing Spikeball with her friends, reading a book, or going for a run while listening to a podcast.

Weston McCorkle – The Voice of the State Fair Livestock Shows

A friend once described Weston McCorkle as the “voice of the State Fair livestock shows.” That nickname, given nearly 20 years ago, has stuck ever since as many people still refer to Weston as “the voice.” In many ways, Weston

Laurel Gray is a recent North Iredell High School graduate who will be attending N.C. State University to study Agricultural Business Management. She is one of twelve students that received a R. Flake Shaw Scholarship from N.C. Farm Bureau. The

July 29th is National Intern Day! The Department of Agriculture has 10 interns this summer, all working in various divisions. And they’ve been up to way more than just fetching coffee. Check out the exciting projects a few of our

Ogburn Berries & Produce is a family-owned strawberry and produce farm in Willow Spring in Johnston County. The farm is currently operated by 4th generation farmer, Sim Ogburn. The farm was bought in the early 1900s by Sim’s great-grandfather, Simeon

The Barn at Cranberry Creek is an incredibly stunning wedding venue located in Boonville in Yadkin County. It opened just four years ago in the spring of 2018 by three brothers, Darin, Dwayne and Neil Brown. The three brothers, however,